The Drake of Bonemire Howe

So, I fell in love (or in froth) with 13th Age. I was hacking the Black Hack for a more “heroic” feel, and I realised while working on it that 13th Age was doing basically everything I was trying to do. So I bought the books and got cracking. Try 13thAge!

The campaign is a weird one. Set up to be a low-maths catharsis for a friend in front-line healthcare, I’m using the clickbait system for setting up the world. Basically, you do as little prep as possible and discover the world alongside your players. Establish what you need to prep a session and leave the rest hanging. I amended the Icons to fit the world as we went along. By the time character generation was finished, there were nine new Icons and four waiting to be adapted. Not that the Prince of Shadows ever doesn’t apply.


Welcome to Waageburg
It’s smoky, it’s grimy, it’s coastal, it’s gross. It’s a 1600s Baltic-style trading town on the edge of the Black Colonies, which are maintained by the Amarantine Empire for their valuable oil deposits. It’s ruled… it was ruled by Duke von Waage, the greatest general in the western empire. His power was such that he personally controlled nine drakes, a feat unmatched in the lands of men (1). 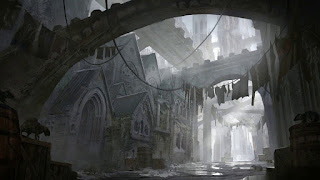 But the Duke is dead. His drakes fled before they could be sedated and reassigned to new masters, and so the Seneschal of Waageburg has hired bands of adventurers to hunt them down. They cannot be allowed to prey on the Black Colonies (2). They must be brought down. The imperial court in Jamaranz is too far away to promote a new Duke quickly, and in the meantime, order must be maintained.

The party unite in search of the missing drakes and immediately start looking for clues. With some great rolls to investigate, they discover that: drakes are born in the mountains; their scales are made of stone; the Duke might have been poisoned; the Duke definitely was poisoned; he was poisoned with a rage potion that gave him a lethal fit of apoplexy, rage and adrenaline; the Duke’s death infected the drakes; most of the drakes are injured from fighting in their roost atop Waageburg Keep.

Vik, our gnoll druid from the far lands to the east, got a crucial clue from a maid who was worried the drakes had been sent out against the Shorn Men: the drakes went north (3). Wojtek the Fightbear, an armoured bear, discovered that the Shorn Men were a radical separatist movement who cut their hair short in defiance of Imperial fashion and plot to take over the Black Colonies to form a separate nation.

The Voyage to Bonemire
They headed out into the wilderness, unerringly led by Akhyar Nassar, a former member of the Imperial Corps of Scouts. Seriously, he rolled so well they were in sight of the main part of the session within half an hour. Sorry random encounters!

Skollston the tiefling barbarian (a former Alferez in the Imperial army) suggested they rest for the night in the village of Muddlewood, where they discovered several members of the village had recently cut their hair and disappeared into the forest. And another party of adventurers (or Imperial Scouts) had ridden through grim-faced that day.

During the night, their rest was disturbed by a wilderfolk raid (4). Goatfaced beastmen burst into the village, slaughtering sleeping villagers and focussing on the inn where Vik and Wojtek slept by the fire. (4) Waking, the heroes fought hard against two groups of mooks, a great-axe wielding champion and a shaman. Bloodied – especially by the shaman’s battle curse – they eventually triumphed. Vik slew the champion and Akhyar blew the shaman’s head off with his arquebus (5). It was 2am by then, so bed it was. As they headed back to sleep, Vik’s second Icon die revealed itself as a distant cousin offered him a healing potion and rune for his spear.

They woke at dawn, learning that the wilderfolk had last been seen by colonists in their great-grandparents’ day. Heading out again, they rolled well again to make their way through the dark woods of the Muzzle. In fact, they found some semi-hidden paths through the woods and took them. Finally, a random encounter!

An armoured bear, sobbing and stinking in the woods, deprived of his armour. His name was Smirdant, and he was very upset that humans had stolen his armour because they said he’d broken his oaths. The party quickly agreed to help him and successfully intimidated the six men who had taken it. It turned out Smirdant had broken his agreement to be a guard when he realised they were travellers and not stationary miners.

Interrogation of the six quickly revealed they were Shorn Men, and that they had set up an HQ in Bonemire Howe. There were several hundred barrels of gunpowder there, scores of arquebuses, and a garrison of thirty men, their leader Custas, and their druid Yohn Bone-eye. It turned out one of the drakes they were chasing had landed on the Howe, and Yohn had commanded the earth to move to give the drake sanctuary. The Shorn Men were trying to make it serve them!

Smirdant proved himself to genuinely be a terrible person when Wojtek failed his Charisma check to convince the bear to join them in their fight. Despite owing the party big time for getting his armour back, he just sidled off saying he was going back to Karalistland and never coming back to human lands. 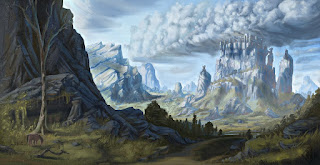 Bonemire Howe
The party took one of their Shorn Men prisoners as a guide and tied the rest up in the woods (6). He guided them not to the top of the Howe, but the main gate, which Yohn had opened to let the dragon in. Skollston lit a torch to light the way and its smoke triggered a trap! A hail of stakes came flying out of the ceiling and only Skollston failed his PD save. Of the party, at least. Their guide also lost half his HP to a stake, and Skollston took the chance to use his injury as a motivational tool… the party soon knew everything about the Howe’s layout.

It was decided that Yohn Bone-eye was the key, because only he could move the earth to let the dragon out. So he had to be eliminated. They “snuck” down towards his room in the belly of the Howe. “Snuck”. Skollston and Wojtek attracted the drake’s attention as they passed it on the stairs and took fire damage.

Then the labyrinth. This was a group skill check with two halves; finding their way through, and surviving the mind-rending geometry of this ancient place. They broadly succeeded. They found their way through and only took 1 psychic damage each.

The battle against Yohn was brutal (7). The party almost slew him in turn one, aided by Akhyar’s incredible stacking critical hit ability, but he survived long enough to call a clayguard forth from the ground. Yohn called the very clay in their bones to rebel, and everyone took serious damage. The clayguard was almost impervious to damage, and took a long time to slay, even after Yohn was slain. Vik cut his head off and put it on his spear to intimidate any survivors.

Wearily, they re-ascended. I gave them an offer: sacrifice a recovery and beat the remainder of the Shorn Men. They agreed, and didn’t have to try and stop Custas Yolvus escaping. Lucky them.

Vik wanted to talk to the drake instead of killing it. He rolled 29 in the end, and learned that while drakes have a heartfelt genetic need to be psychically bonded to a partner, it did not want to go back to being mentally dominated as it was under the Duke’s command. A slight swamp of moral quandary briefly enveloped the party before Akhyar once again led them past my random encounters and back to Waageburg.


Session Conclusion
There the seneschal refused to pay them properly for the dragon, since while it was contained, it wasn’t exactly returned dead or alive to Waageburg. However, the party were rewarded for their slaughter of various Shorn Men and the noted renegade Yohn Bone-Eye. The party wanted to keep Bonemire Howe for themselves, but the Seneschal derisively denied them a huge prehistoric fort and a drake because they were four randoms who had just come together that morning.

Real life intervened and the session ended right on schedule, 3.5 hours after it started. The campaign to discover where the Duke’s drakes went shall continue. Especially since the players want to try and bond with drakes themselves. DC35… Pre-requisites not yet established!


Addenda
(1) The Cid caste of the Amarantine Empire are founded on the notion that they are dragonblooded, and thus the only people in the world who can bind drakes to their will. The great warriors of the empire control one or more drakes each. Mechanically, they can dominate 1 drake per level.
(2) A drake is like a warplane; expensive, ultimately expendable, and not to be left in the wrong hands.
(3) This was the info his Icon die (Ashen Empress) won him.
(4) I used goblin and orc stats to represent different sizes of beastfolk in classic GW style.
(5) Arquebus: A home-brewed weapon. D10 damage, reload requires a move and a quick action consecutively.
(6) When they got back to Waageburg they realised they had forgotten the other nationalists that they’d tied up in the woods. No-one seemed too bothered.
(7) Yohn was a Derro Sage, and the clayguard was a Derro Maniac. I reskinned all abilities to be earth-based. This was two level 4 monsters vs one party of four level one characters… they survived – without the Escalation Die! That’s on me.
Posted by A-Historian at 22:43